Controversial Nigerian actor Uche Maduagwu has revealed the cause of most breakups in marriages especially for Nigerian actresses and celebrity wives.

Uche Maduagwu has stated that most Nollywood actresses’ marriages fail because of disloyal wives.

He is of the view that Nollywood actress are disloyal to their husbands hence the collapse of the marriage consequentially.

Uche Maduagwu made reference to Nigerian’s power couple, Davido and Chioma, citing that if actresses were loyal to their husbands as Chioma is to Davido, most marriages will still be stronger even now.

94% of marriage breakups in Nollywood is caused by disloyalty from popular actresses… I dont want to mention any name because most of the actresses involved are not just colleagues but also close #friends, but sometimes the truth is bitter. If you take a closer look at all the recent #marriage breakup in our industry, you will notice a pattern, disloyalty, some actresses actually allow their #celebrity status restrain their duty of total loyalty to their #husbands, and before you know it, one thing leads to another.

I am not saying this because my prayers brought Chioma and @davidoofficial together, but if popular actresses in #Nollywood were loyal to their ex husbands like Chioma is to #Davido right now, there would be no breakups. 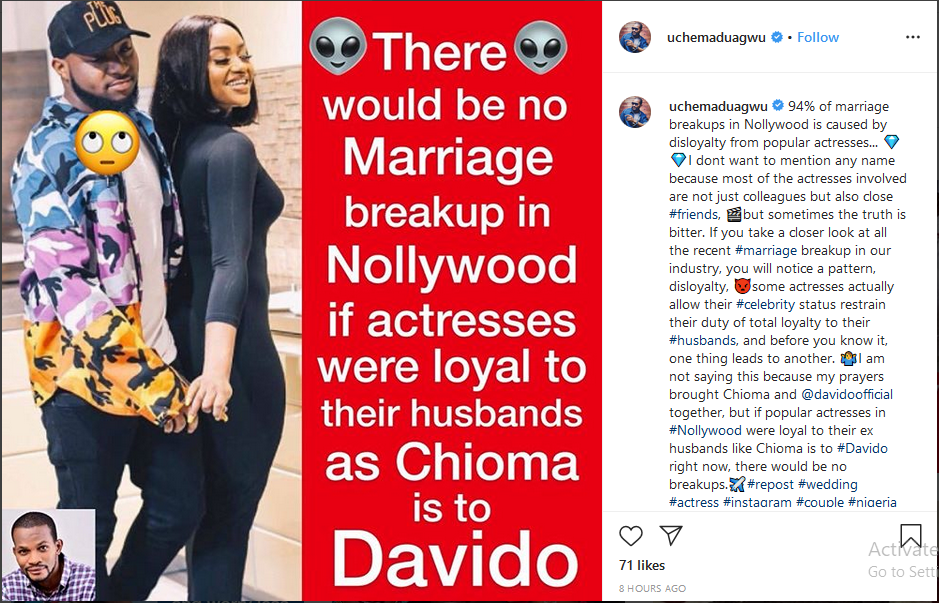 ‘Finally Done!’ Wizkid says his album, ‘Made In Lagos’ is done

On February 20, 2020, Nigerian star, Wizkid took to his Instagram page to reveal that his long-awaited album, ‘Made In Lagos’ is finally done. The message came via his Twitter account. He wrote, “Finally done! So you know what that means!” This came after he wrote that, “I(‘ve) been working on my album and my spirit.” Finally, he also […]

Apparently, American rapper Snoop Dogg is a big fan of the Big Brother Naija reality TV show, or at least, he is a fan of Diane Russet. Recall that Diane’s trending sleeping picture went viral when she was in the BBNaija house, making her the object of memes on social media.   And just when […]

A busty woman with natural 34KK b**bs who receives hundreds of messages a day, has shared some of the disturbing messages she gets from strangers online.   Despite having back pain and struggling to find clothes that fit due to the size of her b**bs, Anastasia Berthier, who lives in Russia, says she is proud […]